by Kenosha Kid featuring the Horns From Hell 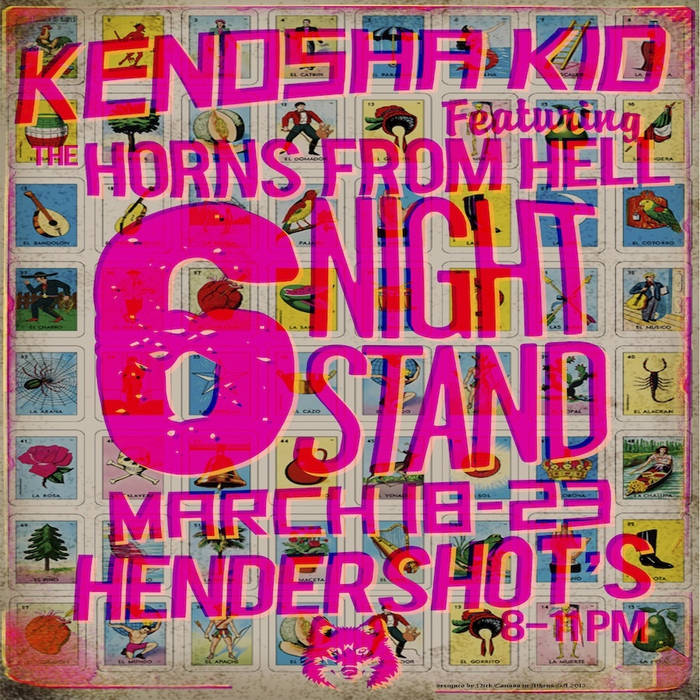 **This live show was recorded after we had finished our studio session.

I am attaching composition notes to many of these tracks for now.. CLICK ON INDIVIDUAL TRACKS TO SEE

No, this is NOT the upcoming studio recording. Expect that in spring 2014**

~ featuring the Horns From Hell ~ [full bios at end]

WHAT:
Augmented by considerable talents from abroad, acclaimed genre-bending jazz ensemble Kenosha Kid takes the stage six nights in a row to showcase new compositions and explore music beyond the maps of expectation.

Jacob Wick:
Jacob Wick is based in Oakland. He has performed throughout the United States, as well as in Canada, Mexico, India, and assorted European locales, and has taught masterclasses at the Art Institute of Chicago, the Cincinnati Conservatory of Music, the College of Charleston, and McGill University. His installations, videos, and text pieces have been shown in galleries in Brooklyn, Baltimore, Chicago, and San Francisco. As Information Department and overca$h, he has staged interventions, exhibitions, and other activities across the US. Jacob Wick is currently in MFA candidate at the California College of the Arts.

Greg Sinibaldi:
www.GregSinibaldi.com
Saxophonist and composer Greg Sinibaldi, has established himself as one of Seattle's most inventive musicians, embracing a diverse musical
world. Whether he ís performing with his groups Goat or Burn List, playing in the metal band Uncle Pooch, or composing new chamber music, he brings forth a characteristic and unique performance each time he plays. Inspired by a wide range of music and art, Greg has developed a unique improvisational language, developing a virtuostic and rich sonic pallette.

Greg has been the recipient of grants from the Puffin Foundation, Jack Straw Foundation, Centrum, 4Culture and The City of Seattle and has been Artist in Residence at the Banff Center, the Atlantic Center for the Arts and Centrum. He studied at the New England Conservatory working with a wide range of artists, including George Garzone, JimmyGuiffre, and Joe Maneri.

Peter Van Huffel:
www.petervanhuffel.com
Berlin-based Canadian saxophonist and clarinetist Peter Van Huffel has been referred to as “...one of the most intense performers on [his] instrument...” (Raul da Gama Rose – All About Jazz), whose playing “...is richly nuanced, with melody and texture seamlessly integrated to create colorful and evocative statements" (Wilbur MacKenzie – All About Jazz). His principle project is the Berlin band "Gorilla Mask", an energy-packed hard-rock/free-jazz trio that combines influences from Albert Ayler, Peter Brötzmann and John Zorn to Jimmy Hendrix, The Stooges and Soundgarden. Their debut CD - "HOWL!" - was released in November 2012 on the German avant-jazz label Between the Lines and has since received numerous outstanding reviews across Europe, North America and Japan. Peter also co-leads the ensemble "House of Mirrors" with Belgian vocalist Sophie Tassignon: a chamber style quartet that combines contemporary classical influences with exploratory improvisation, and which will release it's first CD in 2013 on Wizmar Records.

In addition to his regular projects, Van Huffel co-leads the trio "The Scrambled EX"; he is a member of the Scott Fields' Freetet and the Andy Schofield Quartet; and he hosts an intermittent series focused on new and improvised music in Berlin. Notable past projects include Hufflignon – an earlier collaboration with vocalist Tassignon, the PVH Quintet – a New York ensemble which he led during his NYC residency from 2002 to 2008; the New York trio Animal Forum; and the PVH Quartet – a short-lived international group with which Van Huffel released the 2010 critically acclaimed album "Like the Rusted Key" (Fresh Sound Records). Other collaborations include irregular performances in Europe and North America with musicians such as Jesse Stacken, Jeff Davis, Michael Bates, Samuel Blaser, Tom Rainey and Dan Nettles, among others.