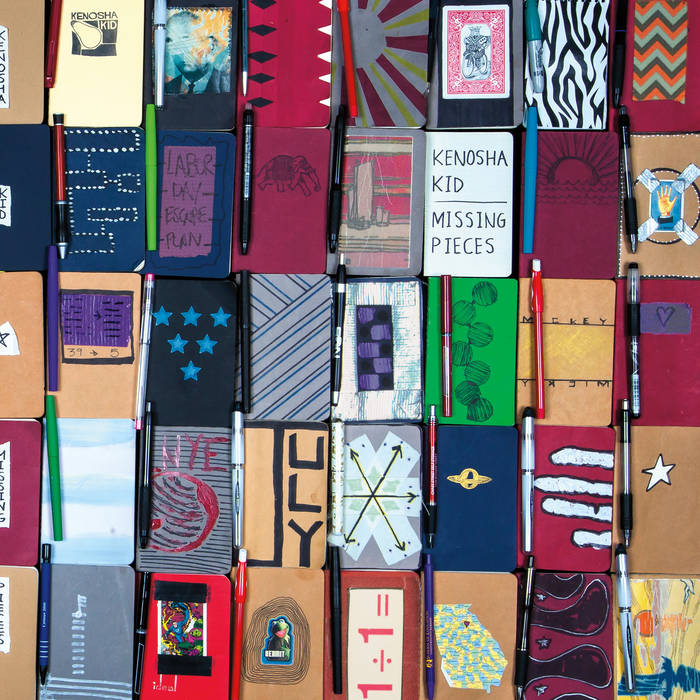 01 Always Will Be
Dan Nettles: Guitar
Rick Lollar: “Rhythm” guitar
Robby Handley: Bass
Marlon Patton: Drums
Built from the sequence:
1, up a 7th, down a 3rd, down a 2nd.

As you might imagine, the “ah-chunk, ah-chunk, ah-chunk, ah-chunk, ah-chunk” rhythmic figure was where I began. As an experiment, I tried to keep most of the chord and move the bass thru the sequence. This generated the 4 bar vamp figure. Meanwhile, I expanded the sequence thru the F# mixolydian scale in mostly 8th notes, which with a few small alterations became the faster melody heard before the bridge. It was appealing both in the melodic shape and that the 3 note sequence was wrapped thru the bars as eighth notes. Stepping back, after all this, I had merely 8 bars of melody [called “Melody”], so I decided to stretch it out into 2 lines: one the moves every 8 beats [“8 Line”], and another that moves every 4 beats [“4 Line”]. Although expanded, the last note of all three melodies remains the same, so I placed the ending of all the lines at the same moment. A layered entrance was created… “8 Line” enters, “4 Line” enters 16 bars later, and finally the “Melody” enters last on top of all this. It is like a high speed echo that ends at the same moment, which is the… Bridge: This 3 chord section is repeated twice and followed by a drum break, and is built by expressing the melodic sequence as a chord. 1, up a 7th, down a 3rd, and down a 2nd becomes a voicing that is basically 1 7 5 4 (aka the vamp’s bass motion), which in the key of B becomes Ema7(#11) Bma7(9, b7) and G#-7(#4).

Composition:
The brutally sparse drum figure was how this began, followed by a very simple 16 bar progression of triads. I expanded the chords into large shapes on the guitar, and voice-lead always upwards instead of the closer downward voice-leading. I improvised over all this until I found a melodic phrase that worked, and then set about arranging the song in layers. As you hear it here, the song is played 6 times with these layers added each repeat: drums, slide guitar melody, bass, low strings ascending, and high string ascending. The last repeat is as it began, with the drum “solo”.

Composition:
Sometimes your mind moves back and forth from two distinct places all in a day. In a way, this song works to reflect this back and forth journey between two different places and feelings.

To begin, at the faster tempo an A triad is expanded repeatedly, almost in a “doubling-every-time” fashion. The slow section begins, and toggles between two guitaristic voicings of A and F, and introduces the melody, dancing around the 6th interval. The tempo remains lethargic for the middle statement, continues to move around mostly in 6ths and modulates to C. Tempo jumps up for the bright third section of the song, delivers yet more 6th derived melody in the guitars and bass before crashing back to the first section. It repeats with solo statements, and the intro reappears to end the song. Insects and nature from my back yard persist nonetheless.

In recording, we each created tracks of melody and accompanying material and selected the best moments throughout, so in listening you hear melody in all the guitars and basses.

Composition:
The seed of this song is an ostinato on the note “D” that I repeated in what seemed to be a mysterious rhythm. With repetition I deciphered the pattern to be a morse-code-like figure: 2 eighths 1 quarter, eighth quarter, eighth quarter, eight quarter, 2 eighths 1 quarter. About the time I programmed a drum beat to reflect this I began to hear the “D” as the major third of the Bb chord, and I was off and running, in the end generating all the harmony of the song. It was an interesting figure to strum on the guitar for sure. The melody is a repeated phrase, leaping again in 6ths thru the Bb scale with small embellishments.

For this recording, Marlon is actually clanging a discarded bathroom vent fan vent cover back and forth with one hand while playing drums. The vent cover’s lopsided accents bring out the ostinato.

Composition and recording:
I don’t write many songs with an actual key change, but “Letters” includes one as part of the structure. The tune began with chords, as I experimented with some simple wide-register triads connected by the descending bass line. In the middle of the second phrase I found a curious way to modulate down a half step to Eb, but via an unexpected bVII chord. The bridge opened up as another extended bass line descending until reaching the current Eb tonic. I found that putting the third (G) in the bass created a nice chromatic pivot to take us to F# and eventually bring the song back to the original key of E.

The melody evolved from an improvisation which I transcribed. I created a harmony line throughout the A sections and in the recording Rick and I blend to sound like one instrument while Robby makes the bass line stand on its own.

Composition and recording:
Add this to my stack of “songs in drop D but not in D”. At the heart of this song is the C chord over an F root, which is kinda what happens easily on guitar in drop D tuning. Rhythmisizing this with a movement from F to C created an intriguing sound and by this point the melody had begun, a simple phrase that manages to dance across the F to C movement. The melody took the lead at this point and drew me to the next two phrases, the final one holding on an extended G, hinting at the whole “waiting”!concept.

In recording, I decided that careful layering would really serve the song’s simple spirit and keep interest, especially putting the melody with Robby in the bass before moving to the short guitar solo. At the end, several tapes of sustained guitar notes are played, and ended all at one.

Composition and recording:
As usual, this song began from a twist of the mundane. The figure for the A sections was something I just started playing. It’s a fairly stock descending bass motion figure thru C G A- chords, with a rhythmic curiosity at the end which placed the phrase into 13 (3 + 3 + 3 + 4). Here’s where the concept of something simple going sideways began, so I pursued a melody for this section which floated over the figure, and eventually found a bridge that seemed to work in weird broken-pirate-ship kind of way. It’s fun to play over and I’m happy we got this particular performance recorded in one take. Favorite moment compositionally would be the chords in the bridge as they fall from Eb to D to D minor to D diminished.

08 Missing Pieces
Dan Nettles: Guitar while at the beach
Unknown song by Carl Lindberg starts and ends.
Other voices all by Julián Muro recorded January 2018 in “Hut 26&” at the Banff Centre.

Composition and recording:
Sometimes it’s hard to say where a song comes from… who knows? I would say I was listening to several Neil Young records a lot around this time, and thinking about sitar music, and simple melodies on one string, and triads over a pedal, and wondering how the hell to keep losing people and go on. The A section chordal vamp arrived first… E- triad into an A triad. Very simple, but where it is placed on the guitar gave it a very rich sound. The B section arrives t the D tonic, but with a nice movement thru F major to give it a little rub. Once the AAB structure was in place, I sang over it and to find a simple melody, something that I imagine any person could sing. To finish I wrote a contrary motion counterline thru the melody.

The band recorded several awesome versions, but I settled on an usual demo version that I created with my friend Julián Muro while in residency at the Banff Centre (My thanks to the Yolandane Freeze Artists in Music Fund). We layered his vocal in several times on both the melody and counterline, and much later, while we were adding strings to the songs I had them also double the parts. The guitar part I recorded myself while at the beach.

The vocal part by Carl Lindberg is a voice recording off of my phone from an unknown place and time which surfaced when I was developing this song. Since it works around the same key center, we began performing the song live with a cassette playing Carl’s vocal, and I recreated that effect here for this record.

Composition and recording:
In drop D yet again, the second section of this song emerged from an experiment with huge, open string voicings on the guitar. Something about that F#- chord to the D major really caught my ear, and I followed that thru for the rest of the progression. You may have noticed, I rely several times thru this record on the 6th interval to generate melodies, and that is true here also. The opening phrase is reminiscent of the last phrase of “03 Another Hour”. Rhthymically, I emphasized the crucial harmonic turnaround by throwing in the shift from 16th notes to sextuples to triplets and back to 16ths which you hear in the clapping (and clanging of that vent again). Listening back to this huge section, I began to sketch out a rubato section that toggled between two roots and explored a short melodic pattern (depending on perspective, scale tones: 5 up to 1 up to 2 up to 3) in a variety of guises. It just got bigger and bigger, and the moment the drums fill between sections is a high moment in the entire record.

To create this version, we added numerous takes of Robby and Marlon clapping thru the B sections, and had the guitars play again over the prior take to thicken the melodic soup.

Composition and recording:
The whole song was written at one sitting while I experimented with one of my guitars that has a weird warble when you flip the tremolo bar down and let it spring back. Again in drop D, and in this case I was seeing what would come about if the melody outlined movement thru V major and then V minor. The bridge moves to the IV- area, and the turnaround is kind of a backwards cycle of IV chords (F, C, to G), an extended subdominant resolution if you will, which is another theme that seems to crop up in a few songs. The whole tune is hopeful, and intended to be a uncomplicated, strong and fundamental in some way. This is actually a live performance that captured all of us at our best… for 10 and half minutes. To fit on this record, adding radio static at the top and strings at the end gave us a way in and out of the song that made sense.