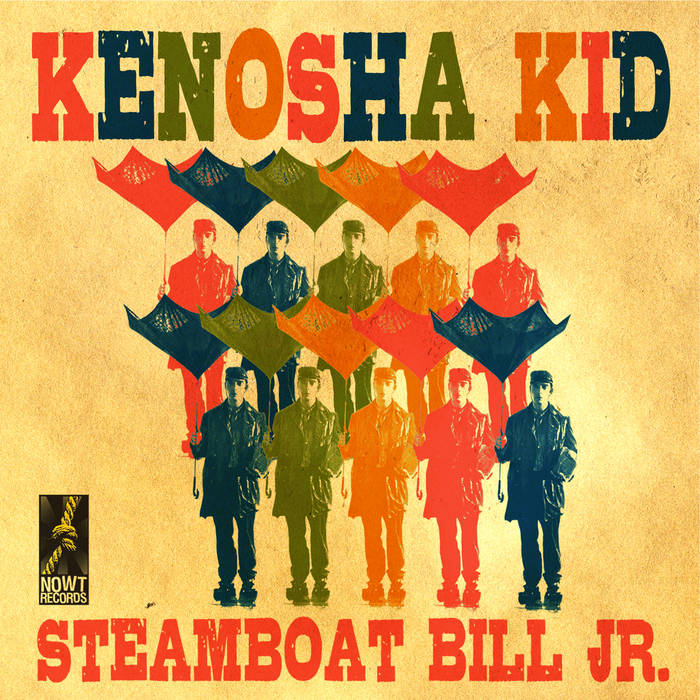 Over three years in the making, Kenosha Kid’s second full length release is a sweeping epic that features 73 minutes of incredible compositions performed by ten of the sharpest new talents from around the world. Bandleader/composer/guitarist Dan Nettles has woven a stunning sonic tapestry that fits alongside Buster Keaton’s classic silent film “Steamboat Bill, Jr.” Although equally steeped in American jazz tradition, the music manages to defy complete classification. Rather than focusing on long-winded soloing, the emphasis is always on the total band sound, melody and texture, and solid grooves. The finished product is a CD and DVD package designed to have something for everyone: part jazz recording… part film… part chamber ensemble… part comedy… part rock band… it’s all these things rolled into one.

About Steamboat Bill Jr:
This whole project began as a commissioned work by the Golden Isles Arts and Humanities Association down in Brunswick GA, and is one of three albums that are ready to be recorded (Fahrenheit and Marlena being the other). I spent about 2 months writing the music, originally scoring it for the 6 piece ensemble that appears on our 2005 release "Projector". The debut was in February 2007. Time passed... I slowly earned enough money to begin documenting this music, and I decided to make the recording as special as possible and incorporate many of my friends near and far.
Working on such a tight budget made me really want to make the music as big as possible... we get so few chances, and i feel like when we go for it, we have to make it special somehow.
The music was performed extensively in the US and in 2 tours in Europe before we began the first session. I re-orchestrated the score for 8 musicians and went into John Keane's studio in October 2007, hot on the heels of a week long engagement performing the Fahrenheit material. We had 3 horns in a vocal booth, upright bass in the control room, mandolin in a closet, and drums, accordion, and myself in the main room. Somehow Tom Lewis managed to set all this up and get it to work and sound great too. There were 3 or 4 video monitors distributed around the studio, so every musician could have one eye on the movie, one eye on the music, and one eye on each other.
The score is written scene by scene, so we did a few takes of each scene. Several scenes were part "session 1" and part "session 2". After 3 solid days in the studio we had 40 minutes of music done, and it was amazing. I couldn't wait to finish the whole recording! Or could I...
Fast forward 6 months later, and I was still trying to get the funds together to do session 2. I had originally planned to get Roland and Susi ("the Gemans") for session 2, but the logistics and money just weren't there. This time, we cut all the tracks with the electric bass and it was a pleasure to have Greg on tenor and bass clarinet. It was 2 days and the studio, and we had it all in the can except for a few guitar re-cuts.
Months went by, and desperate to mix, I sold one of my guitars to mix and master. (It's gone now, but at least it's on the cd...) The artwork I did all myself.