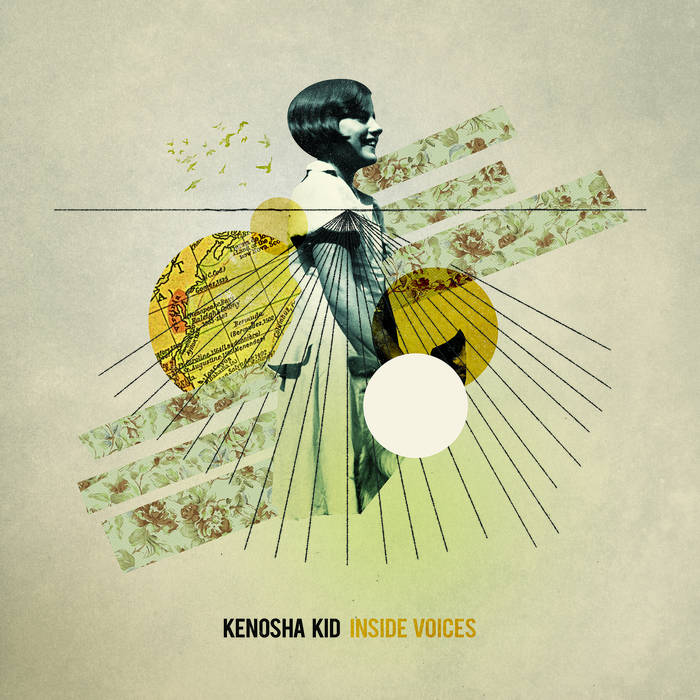 In Thomas Pynchon’s novel Gravity’s Rainbow, the Kenosha Kid is a maddeningly ambiguous figure: it might be a cowboy, or a dance, or a Sodium Amytal-induced hallucination (or all of the above). Guitarist/composer Dan Nettles (who, by the way, has never been to Kenosha, WI) conceived his namesake band with similarly uncategorizable intentions. This Kenosha Kid might be an indie rock band, could be a modernist jazz ensemble, can probably be considered a jam band, and most definitely is all of the above.

All of those different identities emerge at different times (and, very often, several at once) on Kenosha Kid’s new album, Inside Voices, due out March 3rd. The album is the first of two planned releases (the second, Outside Choices, will follow in 2016) to result from a week of intensive exploration in Nettles’ native Athens, Georgia.

“We’re kind of a family band,” Nettles says. “I tell everybody, ‘Do your thing and we’re going to showcase that.’ It’s always a joy to be with these guys, and it always knocks me out that they want to come play.”

As celebratory as much of the music sounds, it was also born out of its share of hard times. Nettles’ mother passed away after an 18-month battle, and when he thought about recording again it was with one question in mind: “What would make my mom happy?” The answer was to create music in ideal circumstances with some of Nettles’ favorite collaborators.

Gathering his core triomates, bassist Robby Handley and drummer Marlon Patton, and a trio of horn players who he met through the Banff Workshop in Jazz & Creative Music – Mexico City trumpeter Jacob Wick, Berlin-based alto saxophonist Peter Van Huffel, and Seattle tenor/baritone saxophonist Greg Sinibaldi – Nettles arranged for a six-night residency at Hendershot’s Coffee that allowed the band to gig by night and record by day. The arrangement allowed Kenosha Kid to enjoy the best of both worlds – stretching out with lengthy improvisations and experiments each evening, boiling the results down to concise, focused statements the next afternoon. The former are evident in a number of live recordings available on Nettles’ website, while the latter make up Inside Voices and its upcoming companion piece.

“We have this wild, sprawling performance thing,” Nettles explains, “but the studio is an instrument. I knew the players that I was writing for could really craft something for a five-minute window that would be interesting to listen to all the way through but at the same time have moments of wild improvisation that work within those compositional ideas.”

Nettles claims that he only writes three types of songs: Action, Comedy, and Goodbye. Inside Voices’ opening track, the atmospheric “Vanishing Point” is one of the latter; the oldest composition, it appeared on Kenosha Kid’s 2005 debut Projector and is, Nettles says, “about being at peace with change. It’s sad, but I feel like it’s also uplifting. It’s a song about finding the beauty of being able to say goodbye properly.” On the flipside is a song like “Zombie Party,” a raucous slice of surf-rock slapstick that imagines the undead romping poolside.

“Fabrication” was inspired by Nettles’ “brushes with insanity,” which he recounts in both his family and in the musical community. The song is built on the shaky ground of a 7/4 ostinato to, the guitarist says, “explore some of the dark places that your mind can create.” Another Goodbye song, “Liberty Bell” uses a touch of southern-rock drawl to the uneasiness that can accompany freedom – especially when it’s unexpected.

The range of Nettles’ influences can be summarized by a song like “Map of the Universe,” which draws inspiration from both the classical guitar music of Cuban composer Leo Brouwer and from Sacred Songs, Daryl Hall’s little-known debut solo album produced by King Crimson mastermind Robert Fripp. The abstract funk of “Mushmouth” pays homage to both James Brown and Fat Albert’s Junkyard Gang; the palindromic closer “Everyone I Know” to Nine Inch Nails by way of Johnny Cash (the song’s title is drawn from the lyrics to Nine Inch Nails’ “Hurt,” memorably covered by the country legend).

The diversity of Nettles’ references can be in large part credited to his growing up in the thriving and open-eared Athens music scene, which has long managed to strike a balance between thriving and under the radar. The city was thrust onto the college rock map in the 1980s following the success of homegrown superstars R.E.M. and The B-52s and counts acclaimed artists like the Drive-By Truckers, Widespread Panic, The Glands, Modern Skirts, Hope For Agoldensummer and Thayer Sarrano among its current residents.

He left Athens at 18 to study in New York and Boston, but returned to make Athens his home base in 2003. After attending the Banff Workshop, Nettles was encouraged by then-director Dave Douglas to try to make a scene happen in his own backyard. Nettles formed Kenosha Kid in 2004 with a rotating cast of musicians and released three earlier albums prior to Inside Voices: Projector in 2005, a soundtrack to the classic Buster Keaton silent comedy Steamboat Bill Jr. in 2008, and the Ray Bradbury-inspired Fahrenheit in 2009.

Being a jazz musician in a rock and roll town has meant that Nettles has been able to carve his own path, folding his multifarious interests into his music without the pressure of genre gatekeepers. “I’ve been allowed to create my own thing independent of most rules,” he says. “In Athens nobody knows what jazz is anyway, so I didn’t have to worry about it. When I started playing gigs I quickly realized that nobody cared if I was playing standards, so I thought I’d just play my music and people liked it more anyway.”

His hometown also introduced Nettles to a wealth of music that he couldn’t help but imbibe and incorporate into his own approach. “There’s so much soul music and music with soul in Georgia that I didn’t even realize while I was growing up that I was drinking it in. One of the things that makes our jazz sound different is that we always keep the soul in there. I always try to, at least.”